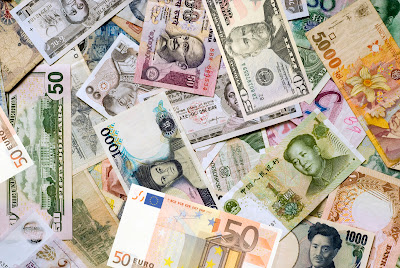 ﻿﻿﻿﻿The economic circles have a new buzz word to debate on - "currency war". However, careful analysis may reveal quite a significant implications as well as reasons.
So much can be the impact that Pascal Lamy, WTO director general, said (on Friday/ 19th Nov 2010) the fight over currency values (in a reference to the United States and China) could upset global financial stability. He goes on to add that competitive devaluations, which have raised fears of a global currency war, could trigger "tit-for-tat protectionism".
For the benefit of our readers, let me give some background. Months back, a section of experts highlighted that China is keeping its currency artificially low. This would help Chinese economy, at the cost of other countries, as an artificially devalued Chinese currency would make its exports more competitive than others.
Since then, China is under great pressure from its main trading partners, and from the US in particular, to allow the renminbi to appreciate more rapidly. In late 2010 legislators in the House of Representatives (the lower house in the US) passed a bill that would allow the US government to punish currency manipulators  by imposing tariffs (although it remains unlikely that this bill will become law). This move essentially targets China. Critics of China's policies point that due to persistent and large current and capital account surpluses, China has managed to witness rapid accumulation of foreign-exchange reserves which rose by a record US$194bn in the third quarter of 2010.

In June 2010, China announced it was resuming a “flexible” currency policy, letting the yuan float on world markets, as the dollar does; but the yuan has barely risen since then. Meanwhile, a potentially weaker dollar affects the United States’ interactions with many other countries. As expected, this move was criticized by China.
In September 2010, in testimony before a Senate Banking panel, U.S. Treasury Secretary Tim Geithner criticized Chinese exchange rate policy, saying that the administration is looking at using "all tools available" to improve trade imbalances between the two countries.
China, after partly freeing its currency to rise gradually from mid-2005 to mid-2008, re-pegged the yuan to the dollar at a rate that US lawmakers and some economists say is as much as 40 per cent below the appropriate value.﻿﻿﻿﻿﻿﻿﻿﻿﻿﻿﻿﻿﻿﻿﻿﻿﻿﻿﻿﻿﻿﻿﻿﻿﻿﻿﻿﻿
﻿﻿﻿﻿﻿ ﻿﻿﻿﻿﻿﻿﻿﻿﻿﻿﻿﻿﻿﻿﻿﻿﻿﻿﻿﻿﻿﻿
Recent economic history shows that US would do all that is possible to safeguard its economic interests. Like, in 1971 precedent in which the U.S. applied a 10 per cent surcharge on goods from Germany, Japan and other nations with undervalued currencies. Those surcharges were removed just a few months later after those nations with artificially low currencies allowed them to float upward.
But with not much co-operation happening on currency revaluation pressure on China, US has instead gone on try out something even bolder - Quantitative Easing.
The Fed announced that this policy (QE2) is the second phase of injecting liquidity into the US economy in the last two years. The Fed will buy treasury bonds and securities from the market to the tune of US$600 billion at the rate of US$100 billion a month for the next few months. This will be funded by printing more dollars.
This has been criticized by certain countries like China, European Union, Korea, Japan and Brazil that this would artificially strengthen their currencies and make them less competitive in international trade.
The Fed has already created liquidity since August 2010 and the size of the Fed budget has expanded by over US$200 billion since then. Coupled with low interest rates in the US, continuing unemployment and lack of capital formation, there is apprehension that excess liquidity will wash over the shores of many emerging market economies, several of which are struggling to come out of the financial crisis.
Some of the implications would be on commodity prices, stock prices of emerging markets, debt, capital inflows and international trade. At the same time, a strong US economic growth is also necessary for sustained world economic growth. The key challenge is to structure a more co-ordinated approach to international capital flows, currency markets and trade.
US Federal Reserve Chairman Ben S. Bernanke recently acknowledged, a week after the G-20 nations meeting in South Korea failed to agree on a common approach, - "Tensions among nations over economic policies have emerged and intensified, potentially threatening our ability to find global solutions to global problems."
While there may be proponents of international trade and regimes like WTO, competitive devaluations, artificial manging currency markets and protectionist approach/ actions like these only expose the reality of how vulnerable international trade has made nations; and frankly speaking, any distorted approach or move towards either protectionism or irrational methods of artificially managing currency valuations would only lead to greater short and medium term risks.
at 4:48 AM